Now for those of you who haven't met me, I must admit one thing that will be a constant theme throughout this website: I am an awkward spaz. I have become quite accustomed to it and it usually leads to funny but uncomfortable stories. The story I am about to tell you is more than one single incident, but rather a domino effect of a multitude of minor spazzes combined into one large spaz.

It was a rainy and bitter night in 2007. Mother nature, a usually kind soul, decided to lash out on the City of Toronto by bombarding it with a downpour of rain. I was sitting happily at home when I received a text message from my sister Jill. Her and her husband Dylan were about to eat lasagna and they wanted to know if I wanted to join them. As a poor student, I knew that I could not refuse a free meal. I had to brave the storm for free food that almost certainly included delicious, mouth watering garlic bread. It was the only option I had. Raindrops pounded down on my umbrella as if God himself was spraying me with a fully pumped Super Soaker Infinity. Deep in my heart, I knew that this would be a night that I would never forget. A night that someday I would try to explain to my grand kids, little Michael III and Rosajita as they curl up beside me next to the Blu-ray firelog and robot dog. Even though my brain let out blood-curdling screams of desperation, begging me to reconsider my choice, my stomach would not listen to reason. As stubborn as a mule that refuses to pull over to ask for directions, my stomach would not sway from its chosen destination. My brain passionately screamed “DON’T DO IT, MIKE. IT’S NOT WORTH IT! IT IS TOO RAINY!” but all I could hear were the growls of my stomach that actually sounded like the words "garlic bread". So I listened to my stomach and I headed out in the rain. I have a giant umbrella in one hand and my ipod in the other. My Ipod was inside of a baggy because that is how I roll, yo!​ 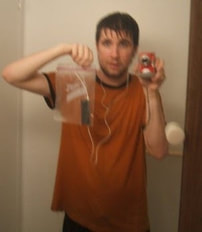 They call me DJ Ziplock and DJ Ziplock don't f*** around with water damage, yo.

​So I turn off my street and onto Mt. Pleasant Rd. After walking for about one minute, I saw that a bus was heading in my direction. Admittedly, it is only a fifteen minute walk to Jill and Dylan’s house and it is one straight line. No side streets or turning necessary. But it was POURING, I didn’t feel like being damp all night, and I had a bus pass so why not? I ran to the bus stop and waited for the bus to take me the rest of the way.

I stood there and as the bus pulled over to let me on, I noticed the bus driver was a young, hip-looking African-Canadian gentleman. Back then, I always wanted to impress young, hip-looking African Canadian gentlemen for some reason. I guess I wasn't as secure in my youthful RADNESS as I am now. The door opened so I placed my ziplock iPod into my pocket (all while making sure the driver saw how cool and dry it was in that baggy) and with my hands free, I took the opportunity to close my umbrella. Though I did not hear the umbrella click to ensure that it was safely closed, I assumed that I probably just couldn’t hear it over the bitchin’ Styx playing in my ears. One step into the bus, the old saying “Don’t assume because all it does it make a fool of you and I” proved to be correct.

In one swift, jarring motion the umbrella exploded in my face. In front of the young, hip-looking African-Canadian gentleman that I wanted to impress, I yelped out “AHHHHHHH!”

Now for the rest of the story, I want you to remember that there is loud music playing in my ears. Anything that I say is probably much louder than I thought it was when I said it.

Wet, startled, and humiliated, I begrudgingly walked up the stairs and flashed my pass to the young, hip-looking African Canadian bus driving gentleman that was now shaking his head in embarrassment for me. With my head down in shame, I ignored eye contact with other passengers and spotted an empty seat by a pole. The bus had just started to move so I grabbed the pole in support and swung down into the seat. Unfortunately, when I grabbed the pole I also managed to push the “next stop” button that was inside the pole. As I saw the “NEXT STOP” sign at the front of the bus light up and I heard the barely audible “ding!” over the music playing in my ears, I felt like a snowball rolling down a hill. Only instead of snow, it was some sort of spaz substance. We’ll call it uh...spazidue. I was a spazball rolling down a hill of spazidue and I was only getting bigger and bigger.

“SORRY! THAT WAS JUST ME! SORRY BOUT THAT!” I yelled, not considering the fact that I was 3 feet away from the driver and didn’t need to yell.
​
Before that minor incident even had time to cripple my self-esteem, I noticed that the bus was turning. My route required no turns, so it became quite apparent that I was on the wrong bus. So instead of playing it cool in front of my new "homey", I reacted by shouting in a monotone and almost robotic manner, “I AM ON THE WRONG BUS!” Smooth.

So this was about 14 seconds in and paranoia really started to set in. Will he stop at the next stop so I can get off? Will he listen to my blurt about accidentally pushing the button or will he listen to my blurt about being on the wrong bus? I certainly did not want to push it any further by asking him. I walked to the back door and hoped for the best. I sure as hell wasn’t going anywhere near the young, hip-looking African-Canadian bus driver gentleman.

All I wanted to do was get off this bus. After what seemed like minutes but was likely only 7 seconds, the bus stopped. I pushed with all my might on the back doors, but they wouldn’t open. Thoughts raced through my head. Thoughts like: “Oh God, I am never getting off this bus” and “Aw jeez, now he’s never going to invite me to chill in his crib”. Finally, I succumbed to my frustration and began to yell “THE BACK DOOR WON’T OPEN” but I only got to “THE BACK DOOR WO...” before I realized the reason why the door wasn’t opening:

We were stopped at a traffic light, not a bus stop. My ball of spazidue had turned into a spaz avalanche, or Spazalanche. At the 27 second mark, the bus pulled into the stop and I got off, forgetting to take my dignity with me. You know what the worst part was? After finally arriving to my sister's house drenched and starving for that garlic bread, it turns out THERE WAS NO GARLIC BREAD. All I had was lasagna with a side of wet, homey-less sadness.

But at least my iPod was dry.